Options and Challenges in Providing Universal Access to the Internet: Part Two 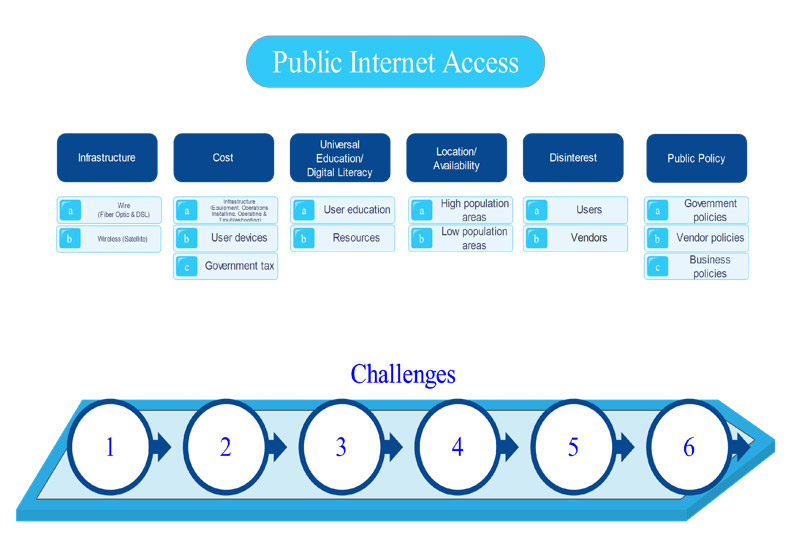 Once a viable infrastructure is determined, based on the example of Internet-rich countries, further participating entities, including ISPs, may appear and business will flourish. This growth could reinforce better quality, lower rates, and raise the potential for citizens of the global community to access the Internet. In the same way that those countries that once benefitted from the well-dispersed infrastructure of 3G were also the ones who first switched to 4G and are now moving to 5G, so too could an iterative application of infrastructure benefit developing regions. Korea and Japan are good examples of this iterative process and are currently among the best Internet service providers in the world in terms of offering both reasonable rates and extensive access.

As noted, 4 billion people around the world are deprived of Internet access and 31% who do have access don’t even have 3G coverage. By exploring and providing innovative solutions towards the installation of the necessary infrastructure or by using existing infrastructures to propagate signals to disconnected and isolated regions, many of these discrepancies can be addressed. Innovative solutions thus far explored include, for example, the tuning of satellite transmission systems to catch Internet frequencies that connect remote villages to the global network, as well as the exploitation of power-lines to provide multi-gigabit wireless broadband.

All six of the above options and challenges (from both part one and part two of this article) must be addressed individually and integrally before the reality of Internet access for all can be realized. Through the combined efforts of policy makers and technologists, ingenious thinking practices such as the solutions mentioned above will lead the way to fast, efficient, and cost-effective approaches for providing universal Internet access. IEEE’s Internet Technology Policy community hopes to contribute to this effort through sound Internet technology policy practices and endeavors to lead the way towards providing universal Internet access to all global citizens. Due for publication in early 2017, the Internet Technology Policy community has submitted the final results of their research to the Internet Initiative in the form of an extensive, collaboratively-authored white paper that addresses the above six issues in further detail.

Born and raised in Chicago, Helen earned a B.S. and an M.B.A. from the University of Illinois at Chicago.  She is currently an adjunct professor at North Park University in Chicago. Helen has traveled to Nicaragua twice with an American NGO, where she helped install off-grid solar electricity in two rural villages that were too far from the traditional infrastructure. Her ongoing doctoral dissertation from Walden University (expected 2017) deals with the topic of bringing the internet to rural areas in Central America using off-grid renewable energy sources to first bring electricity to these rural villages.

Rajesh has earned a B.E degree in Electronics and Power Engineering from the National Institute of Technology-Nagpur, India and a M.S degree from the University of Saskatchewan, Canada.  In the last 19 years he has provided engineering services to private and Government organizations in Australia, Canada, New Zealand, Philippines, India and USA. He is currently providing specialized engineering services for power generation project at the world’s largest petrochemical complex in Gujarat, India. From 2009 to 2010, he undertook research in tharea of public policy for electricity sector at the Auckland University of Technology.

Nagender earned M.Engg. in Computer Tech. and Applications from Delhi College of Engineering and is a PhD Scholar at YMCA University of Science and Technology, India. He is currently Senior Manager at Innovation and Enterprise Office, Universiti Brunei Darussalam. Nagender's android app based on peer-to-peer networking, OffAT-Chat in Airplane mode, recently won Brunei ICT Awards 2016 to represent Brunei in Asia Pacific ICT Alliance Awards, Taiwan. His ongoing doctoral work is in area of ad-hoc social networking without using any centralized infrastructure.

Mohammed Aledhari received the B.S. degree in computer science from the University of Anbar, Anbar, Iraq, in 2003 and the M.S. degree in computer science from the University of Basra, Basra, Iraq, in 2010. He is currently working toward the Ph.D. degree at the Department of Computer Science, Western Michigan University, Kalamazoo, MI, USA. He is currently a Doctoral Associate at the Center for High Performance Computing and Big Data, Western Michigan University. He also served as a Software Engineer Team Lead at the Iraqi Drilling Company (IDC) from January 2005 - August 2011. His current research interests include Internet of Things, Big Data, Machine Learning, Networks, Cloud Computing, Microcontrollers and Robots.

Dr. Ali Kashif Bashir received his Ph.D. in Computer Science and Engineering from Korea University, South Korea. He is currently working for Graduate School of Information Science and Technology, Osaka University. Dr. Ali is a senior member of IEEE and an active member of ACM and IEICE. He has given several invited and keynote talks and is a reviewer of top journals and conferences. His research interests include: cloud computing (NFV/SDN), network virtualization, IoT, network security, wireless networks, etc. He is also serving IEEE Internet Technology Policy eNewsletter as editor in chief.

Jared Bielby received a double master's degree at the University of Alberta, Canada in information science and digital humanities with a thesis route in the field of information ethics. He works as an independent consultant in information ethics and internet governance. He currently serves as co-chair for the International Center for Information Ethics and editor for the International Review of Information Ethics. He is moderator and content writer for the Institute of Electrical and Electronics Engineers' (IEEE) Collabratec Internet Technology Policy Forum (IEEE-ITP) and is founder and editor-in-chief of The Freelance Netizen.