We live in a world that is increasingly connecting and communicating over the internet. The need for on-demand services and data is growing at a staggering rate. Internet users demand high bandwidth activities such as business-level applications, video streaming, and online gaming at increasing rates. Furthermore, these services are needed wirelessly. Users are increasingly mobile, which means that they need their data to be mobile too.

Our current wireless technologies face many problems to meet this growing demand. Capacity, efficiency, availability, and security are all difficulties for Wi-Fi. It is possible to solve these problems without departing from Wi-Fi through the development of more powerful Wi-Fi technology, more complex encryption schemes, and the growth of ubiquity of Wi-Fi devices.[1]

There is a different medium through which one could transmit data: visible light. Data traveling at the speed of light replaces data traveling over electromagnetic waves, specifically radio waves.[2] This is the idea behind Li-Fi—using visible light to send and receive data. Vast quantities of data can be streamed through light-emitting diodes (LEDs) by varying the LED intensity faster than the human eye can track, thus making it seem like the light is always on to the human observer.[3] Li-Fi can help share the data load that Wi-Fi struggles to carry alone. The same lights that are used to illuminate our offices, homes, cars, and streets can connect us to data networks. Li-Fi is high speed, bi-directional, and wireless.[4]

All that is required for a coded communication is a binary system. A light bulb turned on and off repeatedly provides the potential for communicating ones and zeros. LEDs are high-brightness lights that can flicker on and off thousands of times per second.[3] Li-Fi is based on binary logic. When the LED is ‘on’ it transmits a ‘1’ and when it is ‘off’ it transmits a ‘0’.[5] The transmitted optical signal is detected and received by a solid-state photodiode at the user equipment receiver.[6] Li-Fi operates in a system that utilizes a controller to transmit data along with controlling the LED light bulb. The controller also controls the varied rate at which the LED is switched on and off, which is a critical component in data transmission with Li-Fi. The content that is streamed and encoded is located in the lamp driver, which is connected to the LED light bulb. The LED light bulb also contains a microchip that converts the digital data to light waves and transmits.[7] Along with the lamp driver, the microchip is also a critical component to the switching of the LED for data transmission.

A device equipped with a photodiode or photodetector (refer to Figure 1) is responsible for the receiving the streamed content through the light beam. Once received by the photodetector, the streams are amplified and then decoded into binary that is viewed as applications that run on devices enabled to use the internet.[8] 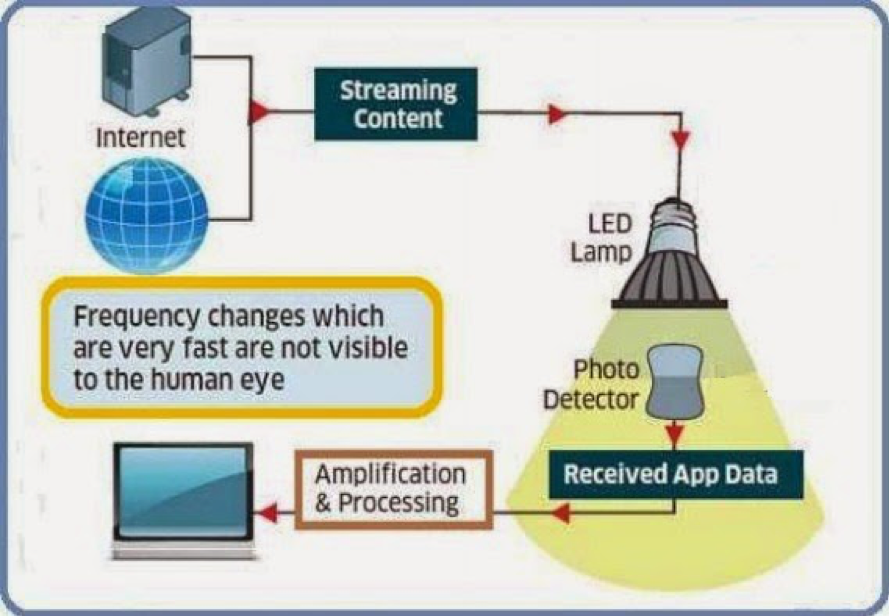 The utilization of unnatural material in conjunction with LEDs indicates Li-Fi is a metamaterial solid state lighting topology. Environmental sensing tools are important to understand in a Li-Fi system due to the dispersive nature of light waves. The signal being propagated from the LED must have the capability to be received by the photodiode successfully regardless of the environment the system is utilized in. In choosing to select a proper sensor for successful signal reception by the photodiode, factors such as passive or active sensors, range, sensitivity, and drift must be accounted for.[9] The photodiodes within any Li-Fi system must be designed to be active, meaning the system requires a power supply for the sensors to convert the transmitted data into usable content. Range and sensitivity are critical to the environment the system is in, because Li-Fi requires a clear line of sight between the transmitting LED and the receiving photodiode for transmission to be successful. Over time, the Li-Fi systems will suffer from drift, which is the gradual degradation of sensor performance. All these factors are critical to the sustained success of the system performance.

Kinetic inductance must also be accounted for due to the high frequency of light waves being used in the Li-Fi systems. Kinetic inductance is defined as the exhibition of the inertial mass of electric particles in alternating electric fields as an equivalent series inductance.[10] Researchers have encountered kinetic inductance in their attempts to develop metamaterial systems for extremely high frequencies. These tests generally have utilized conductors that are about 200 nm or less and have experienced a large amount of kinetic inductance in comparison to the geometrical inductance that normally scales with device size.[10] Li-Fi systems are unique, since the components and how they are utilized are innovative and consequently unique. Li-Fi uses colors of the visual light spectrum to successfully transmit data. The wavelength for visual light is between the ranges of 400-700 nm and corresponds to a band of about 430-770 THz. Due to the uniqueness of Li-Fi systems and the components being utilized, kinetic inductance is not a detrimental factor to the overall system performance.

The primary MCM technique that is suitable for Li-Fi technology is orthogonal frequency division multiplexing (OFDM). OFDM is a technique that utilizes MCM and frequency division multiplexing (FDM). Some argue that the most promising modulation technique to ensure multiple access in a visible light communication (VLC) network is OFDM. The OFDM technique uses subcarriers to transmit simultaneously parallel data.[12] It has high spectral efficiency, robust multipath propagation, tolerance to channel delay spread, employment of multiple carrier transmission, and increased symbol duration.13] The optical channel is then divided into multiple sub-channels equal to the number of fixed orthogonal subcarriers.

It is true that Li-Fi technology is still in the development stages. Its inability to transmit across long distances successfully, and without great derailment from interference, is problematic. However, the potential for high data transmission rates cannot be understated. As more research is done and as more technological advances are made, Li-Fi will continually make its way to the consumer marketplace. By transmitting data through the visible light spectrum, light gains a duality of purpose: information and illumination. This level of efficiency and efficacy will not be ignored by a competitive market and Li-Fi will continue to grow in its prevalence. Part 2 of this article will discuss opportunities for and benefits to Li-Fi and contrast Li-Fi with Wi-Fi.

Alex Mantica received his Bachelors Degree in Telecommunications with a minor in Marketing in 2017 from Ball State University. He is currently obtaining his Master of Science Degree in Information and Communication Sciences at the Center for Information and Communication Sciences at Ball State University. There, he has found interest in researching new methods of mitigating traffic congestion within the radio frequency spectrum along with best management and leadership practices. He has accepted a position at a Healthcare IT consulting firm as an Analyst and plans to become a Project Manager after five years of experience.

Stephan S. Jones, Ph.D., Director, Center for Information and Communication Sciences, Ball State University joined the Center for Information and Communication Sciences faculty in August of 1998. He came to Ball State University (BSU) from completing his doctoral studies at Bowling Green State University where he served the Dean of Continuing Education developing a distance-learning program for the College of Technology’s undergraduate Technology Education program. Dr. Jones was instrumental in bringing the new program on board because of his technical background and extensive research in the distance-learning field. Prior to coming to higher education, Dr. Jones spent over sixteen and a half years in the communication technology industry. He owned his own teleconnect, providing high-end commercial voice and data networks to a broad range of end users. Dr. Jones provided all the engineering and technical support for his organization that grew to over twenty employees and two and a half million dollars per year revenue. Selling his portion of the organization in December of 1994, Dr. Jones worked briefly for Panasonic Communications and Systems Company as a district sales manager providing application engineering and product support to distributors in a five-state area prior to starting doctoral studies.

Susan Hyon Parker received her B.S. in Computer Science from Robert Morris University. She received her engineering education jointly through Carnegie Mellon University and Massachusetts Institute of Technology. She is currently pursuing her PhD in Nanotechnology. She was a visiting student at University of Oxford and is presently a UK Engineering STEM Learning ambassador. She is Founder of NanoSchool.eu™, which places emphasis on opportunities to work on authentic research projects alongside academic and industrial scientists as well as engineers using distinctive design approaches. She is participating in Toulouse ESOF 2018 Science Forum and is member of the Nanotechnologies Industry Association.