The rapid growth of the Internet of Things (IoT) technologies is revolutionizing how communities live and interact by enabling IoT devices (e.g., mobiles, sensors) to work as interconnected systems of digital and personal information. Smart grid and power systems, e-health and assisted living systems, and industrial and environmental monitoring are the major application areas that stand to gain from the growth of IoT.

By 2020, it is estimated there will be about 20 billion IoT connected devices in the world[6]. This increase in the number of IoT-enabled devices brings with it increased privacy concerns. In such systems, tremendous amounts of sensitive data are generated, stored and processed—and it is becoming more complex and challenging to protect such data. Cloud computing has massive resources and can play a vital role in the storage and management of IoT data. It can provide real-time IoT-based services in a distributed and effective manner. Figure 1 shows various IoT-based applications that can take advantage of integration with cloud computing.

However, cloud computing is considered a public and unsecured platform, which makes it exposed to various malicious activities from both outside and within the cloud platform. Therefore, comprehensive privacy solutions are critical to ensure the successful integration between cloud computing and IoT-based applications. This is essential to not only protect the privacy of IoT data but also to develop privacy-preserving analytical services models for cloud-assisted IoT applications.

Figure 1: An overview of IoT applications domains that can benefit from data analytics model in cloud computing. 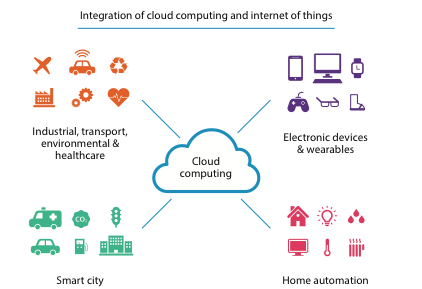 Homomorphic-based cryptography, which has the ability to perform computations on encrypted data, overcomes traditional cryptography limitations and is the superior approach. Rivest et al. introduced the first homomorphic-based cryptography technique in the late 1970s[4]. Since that time several homomorphic cryptosystems (known as Partially Homomorphic Encryption (PHE)) techniques have been developed. However, they are support limited computation capabilities. In 2009, Craig Gentry developed the first Fully Homomorphic Encryption (FHE) cryptosystem[1] that had the ability to evaluate any mathematical function in an encrypted domain. But Gentry’s FHE cryptosystem was impractical for real-world applications, due to the massive overheads associated with its computations. Gentry himself estimated a simple encrypted Google search that would take about a trillion times longer compared to a typical unencrypted search. Several FHE implementations have been created using already existing libraries to simplify FHE operations. The three most prominent efforts are the FHEW[4] and Microsoft’s SEAL [2]. HElib has a special tuning code to enhance performance and also offers the richest API of the three libraries. It speeds up homomorphic Advanced Encryption Standard (AES) scheme performance from 36 to 3 hours[3]. Furthermore, HElib algorithms have a variety of mathematical capabilities that have the advantage over other FHE schemes.

Homomorphic-based techniques have been proven to support a high level of protection for sensitive data. As previously mentioned, homomorphic-based encrypted data are processed in an encrypted domain without the need to be decrypted. This is considered to be the main difference between the two cryptographic. Data is secured through encryption from its sources (e.g., IoT sensors) upon being sent through the network to cloud computing. The encrypted data is then stored in the cloud for further processing in an encrypted domain. Later, the data owner can retrieve and decrypt the evaluation results on the secure side. This process not only eliminates the need to interact with Trusted Third Parties (TTPs) to manage and process the data, it also significantly reduces the massive communication overhead and eliminates the need for encryption/decryption keys, which are major obstacles in traditional cryptography techniques.

In the future, a major focus will be on developing HE cryptosystems that improve both performance and computations capabilities. These efforts will play a major role in the integration of cloud computing and IoT paradigms. Successful delegation of the privacy-preserving process to massive cloud resources will widen the applicability of cloud-integrated IoT applications that require both real-time IoT-cloud-based analytic services and a high level of data privacy. A number of sectors stand to benefit from such advances, particularly the industrial, smart grid, and healthcare sectors.

Ibrahim Khalil is an Associate Professor in School of Computer Science & IT, RMIT University, Melbourne, Australia. He received the Ph.D. degree from the University of Berne, Switzerland, in 2003. He has several years of experience in Silicon Valley Companies. Ibrahim also worked with EPFL and the University of Berne in Switzerland, and Osaka University in Japan. His research interests include scalable computing in distributed systems, e-health, wireless and body sensor networks, biomedical signal processing, remote health care, network and data security, secure data analytics and privacy.

Syed Hassan Ahmed (S'13, M'17, SM'18) is currently an Assistant Professor in the Computer Science Department of Georgia Southern University (GSU) at Statesboro, USA. Before starting at GSU, Dr. Hassan was a Post-Doctoral Fellow in the Department of Electrical and Computer Engineering, University of Central Florida, Orlando. Previously, he completed his B.S in Computer Science from Kohat University of Science and Technology (KUST), Pakistan and Master combined Ph.D. Degree from School of Computer Science and Engineering (SCSE), Kyungpook National University (KNU), Republic of Korea. In summer 2015, he was a visiting Ph.D. student at the Georgia Tech, Atlanta, USA. Collectively, Dr. Hassan authored/co-authored over 130 international publications including Journal articles, Conference Proceedings, Book Chapters, and 03 books. From the year 2014 to 2016, he consequently won the Research Contribution awards by SCSE at KNU, Korea. In 2016, his work on robust content retrieval in future vehicular networks lead him to win the Qualcomm Innovation Award at KNU, Korea. Dr. Hassan is an active IEEE Senior Member and ACM Professional Member and his research interests include Sensor and Ad hoc Networks, Cyber-Physical Systems, Vehicular Communications and Future Internet.

Dr. Rasheed Hussain received his B.S. in Computer Software Engineering from N-W.F.P University of Engineering and Technology, Peshawar, Pakistan in 2007, MS and PhD degrees in Computer Engineering from Hanyang University, South Korea, in 2010 and February 2015, respectively. He also worked as a Postdoctoral Research Fellow in Hanyang University South Korea from March 2015 till August 2015. Furthermore, he worked as a Guest researcher in University of Amsterdam (UvA), Netherlands and consultant for Innopolis University, Russia from September 2015 till June 2016. Hussain is currently working as Assistant Professor at Innopolis University, Russia and establishing a new Masters program (Secure System and Network Engineering). He has authored and co-authored more than 45 papers in renowned national and international journals and conferences. He serves as reviewer for many journals from IEEE, Springer, Elsevier, and IET that include IEEE Sensors Journal, IEEE TVT, IEEE T-ITS, IEEE TIE, IEEE Comm. Magazine, Elsevier ADHOC, Elsevier JPDC, Elsevier VehCom, Springer WIRE, Springer JNSM, and many more. He also served as reviewer and/or TPC for renowned international conferences of repute including IEEE INFOCOM, IEEE GLOBECOM, IEEE VTC, IEEE VNC, IEEE ICC, IEEE PCCC, IEEE NoF, and many more.