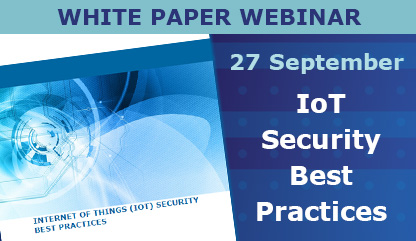 Replay of the IoT Security Best Practices webinar is available.

Individuals, companies, and countries have suffered great harm resulting from unnecessarily weak computer and internet security. The sheer number of potential Internet-of-Things (IoT) devices implies that, if not defended effectively, the IoT has the potential to permit even greater harm. Much of this potential harm is preventable by enforcing a few simple rules. Attend this webinar to learn about IoT security guidelines and best practices that can be used as a basis for future standards, certifications, laws, policies, and/or product ratings.

Why IoT security is so important – and what to do about it | IoT Tech News
4 August 2017 – George Corser’s article explores best practices for improving IoT applications, where IoT’s extreme cost sensitivity is one reason why it requires a fundamentally different approach to security than traditional IT…

George’s research examines the performance of location privacy and security protocols in vehicular ad hoc networks, recently published in the journal IEEE Transactions on Intelligent Transportation Systems. His speaking engagements include technical and policy conferences, such as IEEE End to End Trust and Security Workshop for the Internet of Things. Corser is a member of IEEE Vehicular Technology Society, Society of Automotive Engineers and the Michigan Infragard, where he serves as a resource on the topic of digital security in the transportation sector. As a private citizen, he advocates sensible cybersecurity legislation, successfully lobbying for a researcher exception to a Michigan car hacking bill. Corser holds a Ph.D. in Computer Science and Informatics from Oakland University, a Master of Science in Computer Science and Information Systems from the University of Michigan-Flint, and a Bachelor of Science in Engineering in Civil Engineering from Princeton University.

Jared is the President of Netizen Consulting Ltd., an incorporated consulting and project management research group focused on developments in digital culture. He is an active consultant and project manager for initiatives in information ethics and internet governance and is the founder and Editor-in-Chief of The Freelance Netizen. He currently serves as Co-Chair for the International Center for Information Ethics and editor for the International Review of Information Ethics. Jared moderates IEEE's Collabratec Internet Technology Policy community (IEEE-ITP) where he manages several projects for IEEE's Internet Initiative. He also chairs the IEEE Global AI Ethics Initiative committee on Classical Ethics in Artificial Intelligence. Jared completed his BA in Religion & Theology at King’s University College and a double MA/MLIS in Digital Humanities at the University of Alberta.