Algorithms are finite sequences of specific operations used for solving a particular instance or class of problem. Typically, they are designed to solve problems expressed mathematically using some symbolic encoding to represent objects, events, conditions, and parameters. As realized in contemporary computers, algorithms are formed as a reproducible series of arithmetic and logic operations to be performed on alphanumeric data to answer specific questions. The types of questions that can be answered and the characteristics of algorithms for solving different classes of problems are the focus of computing theory and form the basis of computer science.[1]

Computing devices regularly apply algorithms to make decisions in various aspects of daily life. Decision-making algorithms are applied to more problems in an ever expanding range of products and services and relied on to assist or make both simple and complex decisions for more people every day. The problem-solving capabilities of computers have surpassed human abilities in some respects, and the pervasive use of algorithms for making decisions poses significant challenges to the conventions, rules, and institutions that traditionally govern human decision making. As more functions performed by people that require continuous dynamic decision making are now executed routinely by machines, the strains on the established policies and regulations governing decision processes are becoming clearer and are a matter of urgent social import. Consider that while automated vehicles reduce the rates of intoxicated driving, other modes of “impairment” can affect the critical decisions that impact people’s safety and must therefore be regulated as universally as human impairment behind the wheel is[2].

Algorithms are imperfect, limited by the fallibility of the people that created them. They may contain logic flaws, or the assumptions embedded in the models that guide the computations may be subjective or biased. Approximations, noise, and errors in the data they process constrain their domain of validity and limit their resolution and accuracy, and they are subject to systematic or random faults in the host or auxiliary computing systems. These possibilities may produce erroneous results and lead to unintended consequences, with unacceptable outcomes and undesirable impacts to specific individuals or particular groups of people. The mechanisms of protection and assurance codified in our polices and regulations must keep pace with adoption to compensate for increases in, and adapt to the reallocation of risks created by, ubiquitous algorithmic decision making.

Algorithms process information made available to them into new information through a series of mathematical transformations, numerical calculations, and logic operations. Figure 1 illustrates the basic structure of algorithms typically used to make decisions. Data presented to the algorithm as “input” may be operated on directly by the algorithm, or they may be filtered, transformed, or aggregated in some way before being processed by the sequence of calculations and logic that form the algorithm. These computations are the operations that comprise the reasoning that analyzes, or “considers”, the inputs in relation to each other, or in comparison to other templates according to some model that mathematically describes the question of interest.

The end result of the computations, generally referred to as “output”, may be formed as a discrete value or a set of values. The output data often express a given or expected condition or status of an object or event, or may represent a relationship between multiple objects, events, or phenomena. These expressions typically correspond to the choices that are the subject of the decision-making process, or represent the answer to the question or solution to the problem the algorithm is designed to solve.

Algorithms used for making decisions are typically parts of extended procedures, or “programs” that operate as “applications” on one or more types of computing device. These applications perform the functions necessary for the devices to execute their algorithms, such as managing input and output data or interacting with people or other systems, as well as performing the computations required to make specific decisions. Each element presents distinct risks arising from unique properties and must be considered separately as well as collectively. Examining the basic forms and functions of decision-making algorithms leads to a practical approach to designing effective practices to mitigate the risks and prevent unintended impacts from their use.

Figure 1: A simple representation of an algorithm for making decisions. 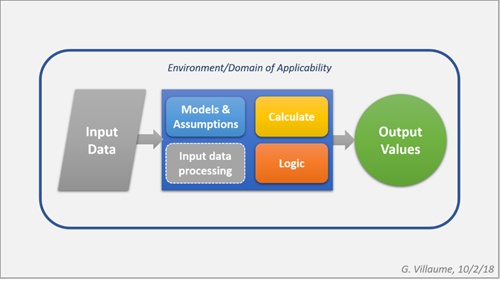 The dynamics of making decisions is itself a topic of research and its study has produced numerous theories that describe the rationales and model the reasoning involved in deciding things.[3][4] These considerations are important to understanding how algorithms lead to a given decision. The data transformations and computations of decision-making algorithms are increasingly complex and more frequently employ esoteric analytical techniques developed from advanced mathematical and statistical methods. Many algorithms designed to assist or make decisions apply elaborate statistical analyses to sophisticated data objects to compute other data structures that express the decision. The specific methods of implementation and details of the computational procedures vary widely between algorithms, even for those designed to solve identical or similar problems, or that make the same decisions using different models or analytical methods.

The complexity of validating and processing the data provided as input, accounting for conditions and verifying key assumptions are satisfied, and ensuring the operating environment is appropriate exposes significant opportunities for things to go wrong. Practically, however, the ways in which decisions are realized with algorithms form a relatively small set of distinct types, including existential determination; assignment to membership in a group or class (is/is-not, or identification of a specific type from a set of possible types); relative scale or order (e.g., comparative ranking such as a credit score); or likelihood of occurrence (e.g., 80% chance a person will click on a given advertisement). The commonality of the fundamental forms and properties of decision algorithms is key to making progress in the policy domain.

Human decision making is far from ideal and frequently entails risks arising from uncertainty, subjectivity, and the limitations of human reasoning. Many of our governance protocols and institutions manage these concerns; indeed, they exist for the very purpose of harmonizing decision making in large and diverse organizations. The need for policies governing human decision making is increased with algorithms, not diminished. Proven practical methods can identify potential “failure modes” to prevent faults, contain undesirable results, and minimize the impacts of unintended consequences. Policies that recognize the common elements and basic properties of decision algorithms can form the foundation for rules and regulations that are effective and acceptable. The means and mechanisms for ensuring safe, reliable, and fair decisions from machines are readily available. We need only to decide to apply them.

Dr. Garrick Villaume is a knowledge systems architect and entrepreneur developing businesses to serve people’s needs for materials, energy, and information with resilient ecosystems and sustainable and extensible processes. He has coded and led development of numerous advanced algorithms and decision support systems for scientific, engineering, manufacturing, and business applications. He currently consults for new and growing ventures as President of Physical Systems, Inc. Dr. Villaume’s experiences include researching the stability of matter, developing and producing advanced magnetic recording devices, and executive roles leading various engineering, product operations, and quality organizations in Fortune 500 data storage enterprises and three early solar energy ventures producing unique photovoltaic technologies. He is a member of IEEE and the American Physical Society, earned his BS in Physics and PhD in High Energy Particle Physics from the University of Minnesota, and holds a certification in General Management and Strategic Leadership from Harvard Business School.

Mubashir Husain Rehmani (M’14-SM’15) received the B.Eng. degree in computer systems engineering from Mehran University of Engineering and Technology, Jamshoro, Pakistan, in 2004, the M.S. degree from the University of Paris XI, Paris, France, in 2008, and the Ph.D. degree from the University Pierre and Marie Curie, Paris, in 2011. He is currently working at the Telecommunications Software and Systems Group (TSSG), Waterford Institute of Technology (WIT), Waterford, Ireland. He served for five years as an Assistant Professor at COMSATS Institute of Information Technology, Wah Cantt., Pakistan. He is currently an Editor of several prestigious journals such as the IEEE Communications Surveys and Tutorials and an Associate Editor of the IEEE Communications Magazine, Elsevier Journal of Network and Computer Applications (JNCA), and the Journal of Communications and Networks (JCN). He is also serving as a Guest Editor of Elsevier Ad Hoc Networks journal, Elsevier Future Generation Computer Systems journal, the IEEE Transactions on Industrial Informatics, and Elsevier Pervasive and Mobile Computing journal. He has authored/ edited two books published by IGI Global, USA, one book published by CRC Press, USA, and one book with Wiley, U.K. He received “Best Researcher of the Year 2015 of COMSATS Wah” award in 2015. He received the certificate of appreciation, “Exemplary Editor of the IEEE Communications Surveys and Tutorials for the year 2015” from the IEEE Communications Society. He received Best Paper Award from IEEE ComSoc Technical Committee on Communications Systems Integration and Modeling (CSIM), in IEEE ICC 2017. He consecutively received research productivity award in 2016-17 and also ranked # 1 in all Engineering disciplines from Pakistan Council for Science and Technology (PCST), Government of Pakistan. He also received Best Paper Award in 2017 from Higher Education Commission (HEC), Government of Pakistan.