The first of this series released in our previous publication (May 2017) suggested that a delay in health informatics standardization could have led to the slow development and adoption of e-health systems hence inefficiencies of the healthcare sector. This part attempts to make further sense by looking deeper into Healthcare Informatics Standards (HIS) in the U.S. over past decades.

An evolutionary view of technology standardization, mapping Tassey’s (2000) categories of technology standards across product/technology cycle, suggested the timing of development, promotion and adoption of different categories of technology standards would be associated pre-dominantly with the evolving technology and market needs. In the early phase of the technology industry, Information Standards (IS) (ontologies, test, measurement and evaluation standards) lay the foundation of R&D and product development. Following that, Inter-Operability Standards (IOS) establish a level-playing field for fair competition between the product-systems under development. Once a dominant design – the architecture of the winning product-system – is accepted by the market and industry shifts its focus to economies of scale (production) through much needed Variety-Reducing Standards (VRS) (promoting both ontological and semantic inter-operability). Finally, Quality and Reliability Standards (QRS) provide the basis for operational efficiencies, customer service levels and market expansion through improvements in relevance and performance of product-systems and services. It might not be an indispensable order of standards development but it makes sense according to the timely requirements of an industry.

Data regarding approximately 74 health informatics standards initiatives was collected from SDO (Standards Development Organizations) publications and websites, and it was analyzed to study the progress of HIS standardization in the U.S. Each initiative comprised at least one standards specification, but many of them had several specifications and sub-specifications. Data was collected about the date of publication of the standard, type of SDO (professional, industry consortia, and government, etc.), function/scope of the standard (clinical and continued care, claims and payment, etc.), and purpose of the standard (interoperability, quality and reliability, etc.). Most of them are developed, regulated and adopted by U.S. organizations while several of them are also promulgated across the globe.

Health Informatics Standardization in the U.S.

Although HIS standardization was initiated as early as the 1970s, the standards developed at that time were limited to classifications and ontological databases mainly pertaining to professional medical practice, offering some support for life sciences research. Some examples are National Drug Code (NDC), International Classification of Diseases (ICD) and Logical Observation Identifiers Names and Codes (LOINC), etc.

Considering increasing complexity and lack of ontological and semantic inter-operability between a plethora of e-health systems, organizations like Health Level Seven International (HL7) embarked on developing an HIS suite covering all aspects of information collection, processing and interchange by e-health systems, i.e., a standard-of-standards2 [1]. HL7 proposed a seven-layered reference model (similar to ISO/OSI reference architecture for the internet) which contains 329 specifications to date covering syntax, semantics, and functions of the e-health information exchange from physical layer to the application layer. HL7 is a non-profit independent SDO since 1987, which is approved by American National Standards Institute (ANSI). Its HL7 suite of standards is by far the most-adopted HIS standards in the U.S. due to its HIPPA-compatibility.

Figure 1 provides a timeline view of HIS standardization in the U.S. for e-health systems based on their application (y-axis) along with the purpose of each standard (color of the dots).

Quite clearly, information standards were developed in the early phases of the e-health systems cycle, but there was a delay in the uptake of system-wide interoperability standards when compared to quality and reliability standards (QRS) and variety reduction standards (VRS). As per the evolutionary view of technology standardization, some inter-operability would be essential for communications and components in the taking-off stage, it might be too early for the QRS and VRS. In fact, the spike in applications and product-system levels inter-operability since the 2000s underpins the fact there had been unmet needs of inter-operability during the take-off of e-health systems in the 1990s. Proactive policy intervention was essential to ensure the timely adoption of e-health systems. 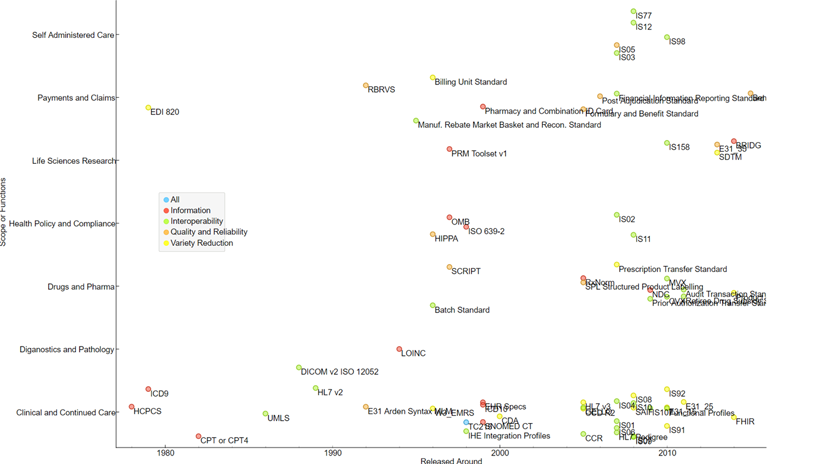 Delays in HIS Standardization and the Role of HIS Stakeholders

These digressions from the technology or market needs for standardization could be attributed to inter-play between systems complexity[2], reverse salience among different technologies at product-system level[3], politicized policy agendas, and the differences in expertise, structural and institutional mandates of the standards stakeholders[4], ultimately raising the costs of standardization. A future article is slated to discuss the above reasons at some length. For now, some discussion on the role of the HIS stakeholders follows. 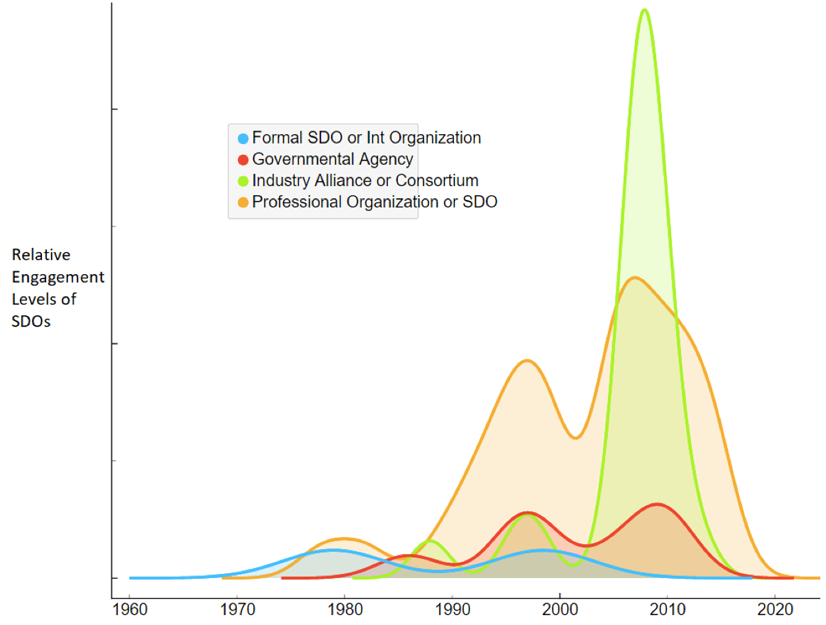 Figure 2: Estimated engagement levels of the SDOs/stakeholders in HIS standardization. (Author’s analysis)

An analysis of engagement levels of four different types of HIS SDOs/stakeholders demonstrated that Formal SDOs or International Organizations along with Governmental Agencies assumed lesser roles in the development and promulgation of HIS during early periods of e-health industry development. Professional organizations and expert SDOs have led HIS standardization, along with Industry Alliances and Consortia, since the early 1980s until the late-1990s, which became even bigger after the 2000s.3

Although the work on HIS was initiated in the U.S. earlier than in most other countries, unlike most other technology industries healthcare sectors have not witnessed emergence of major vendors and controlling organizations[5]. The industry remained highly fragmented with deep expertise pocketed and managed by specialist groups and organizations. Since SDOs and other organizations initiate standards development based on their organizational understanding of the technological needs, the market’s readiness for the standard, institutional mandates and the fitness of their standardization process, the variances in such perceptions are higher in fragmented industries.

Although, governmental agencies did not lead HIS standardization, but still owing to its nature, the healthcare sector is highly regulated. There is no single company or entity dominant enough which could wield enough market power to convert their product-systems into market standards (a.k.a. dominant designs). Lack of guiding vision and support of governmental agencies in the earlier phase of industry formation increases the search costs of relevant and appropriate standards leaving it entirely to the markets, firms, and experts, hence the delays.

1 European organizations were engaged in their own similar standardization projects at this time.

3 It can be argued that this is typical U.S. market-based approach to standardization. However, keeping that discussion for future, it is highlighted that depending on the nature and social impact of industries (or sectoral systems of innovation) varying approaches have been suggested by the standardization scholars.

Susan Hyon Parker received her B.S in Computer Science from Robert Morris University. She received her engineering education jointly through Carnegie Mellon University and Massachusetts Institute of Technology. She is currently pursuing her PhD in Nanotechnology. Presently, she is a visiting student at Oxford University.